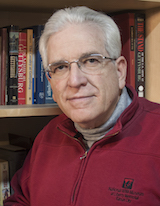 The founder of LOMBARDY STUDIOS, Dana Lombardy created his first company, SDC (Simulations Design Corporation), in 1972 to publish his game Dunkerque – 1940, which utilized an innovative diceless system. He went on to design such award-winning games as Streets of Stalingrad (Charles S. Roberts Award, 1980) and Russia’s Great War, 1914 (Bronze Award in the Educational Board Game category, Serious Play Conference, 2019—this game is available as part of our World War One mini-game series).

Beyond creating innovative game designs, Dana has a closet full of hats he’s worn during his extensive career: author, magazine publisher, marketing director for a historical video company, cartographer, event consultant, researcher, featured guest speaker, and on-screen expert in several documentary series for The History Channel (now HISTORY), including multiple episodes of Tales of the Gun. His multi-faceted experience led to consulting work on products for companies other than his own and on historical events and projects.

Dana played ice hockey in college in 1968 and continues to play in adult pickup games. He has been a Red Cross blood donor since 2011. He supports numerous historical museums and organizations, including as a founding sponsor of the National Museum of the United States Army, and a board member of the World War One Historical Association.

In this March 12, 2021, podcast Three Moves Ahead talks with Dana about how he got involved in the hobby of wargaming and how that led to a career.

On November 19, 2020, I had a really fun interview with the Harold on Games podcast interviewed Dana Lombardy about MacGowan and Lombardy’s The Great War card game, his involvement in the game field in the 1970s, the differences he discovered in designing card games as opposed to board games, and how he came to be a talking head on television history programs.

No Dice No Glory podcast with Dana Lombardy

Dana discusses game design theory, wargame history, the history of World War One, some of his favorite authors and MacGowan and Lombardy’s The Great War card game in a podcast interview on No Dice No Glory. 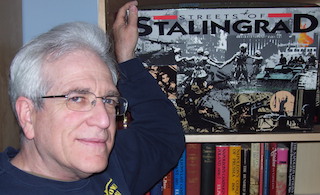 Streets of Stalingrad, a Charles S. Roberts Award–winning game, is being redesigned for a 4th edition.