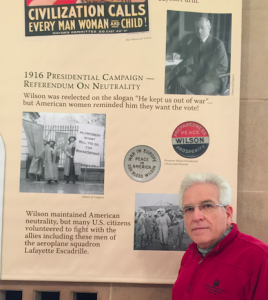 By Dana Lombardy. In February I was asked by the World War One Centennial Commemorative Committee to help create 100th anniversary exhibits that explain America’s role in World War One.

In late May 2018, they installed eight 8-foot square banners in the lobby outside the Herbst Theatre and American Legion Veterans Hall. This is in the War Memorial Veterans Building at 401 Van Ness Avenue. It’s across the street from San Francisco City Hall. The display is free to the public. You can view it at http://alwmcsf.org/ww1/. In 2019 the banners were moved to the second floor.

The Banners Have a Story to Tell

The banners tell the story of America’s initial desire to stay out of a foreign war in 1914. Then the growing sympathy for victims and refugees, horror at the unprecedented numbers of casualties. Then finally the United States joining as a co-belligerent in that war.

It was the first war that saw the widespread use of mechanization. Submarines, airships and airplanes, artillery cannon, machine-guns, tanks, and poison gas were all used. The lethality of these weapons drove armies underground. Soldiers lived for years in dugouts and trenches, separated by a devastated “No Man’s Land” of shell holes and barbed wire.

Millions of American women volunteered to work on farms, in factories, and in many other traditional male jobs. These women replaced nearly five million American men who entered  into the U.S. Army and Navy. Women’s service in the war provided key political leverage to get the right to vote. Congress passed the 19th Amendment in 1919, with states’ ratification in 1920. 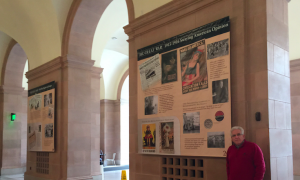 The initial banner display in 2018 was supported by videos and additional exhibits of artifacts and photographs set up in the Veterans Gallery on the lobby level. There was also a series of seminars. The banner exhibit ran through the end of 2019 to commemorate the centennial of the Versailles Treaty (June) and founding of the American Legion.

On 11 November 2018, the 100th anniversary of the Armistice (now called Veterans Day in the USA), the second part of The Great War exhibit opened in the Veterans Gallery of the War Memorial Veterans Building. It also is free to the public. Dana is available for tours and is working on preserving the exhibit as an interactive video.

Game designer, magazine and book editor since 1972.
View all posts by Heraldic →
Tagged  event, World War One.
Bookmark the permalink.