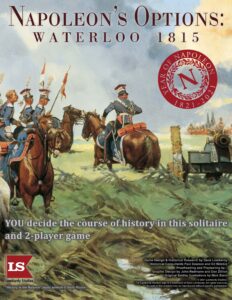 Napoleon’s Options: Waterloo 1815 is the first Napoleonic Wars solitaire and 2-player mini game created by Dana Lombardy, designer of the multiple award-winning Streets of Stalingrad board game (three editions since 1979), and publisher of the magazine Napoleon Journal from 1996-2000.

Four previously published mini games by Dana appeared in each of the first four issues of World War One Illustrated magazine, a Journal Dana published from 20913-2018.

In 2015, Dana began developing his first Napoleonic mini game on Waterloo, in commemoration of the 200th anniversary of the battle. The cover art shows a study from a larger painting by historical artist Keith Rocco.

Napoleon’s Options: Waterloo 1815 focuses on Napoleon’s command decisions, particularly on when to commit and where to deploy his Imperial Guard reserve units. The game is designed to play quickly—with large, perforated die-cut 1-inch square markers (playing pieces), a small game map, just a few turns, and short rules. Although the game has a “mini” format, it was intended to be challenging—including several “what-if” historical possibilities plus random events and hidden markers to simulate the “fog of war.”

You will be able to buy Napoleon’s Options: Waterloo 1815 printed on heavy cardstock SOON. 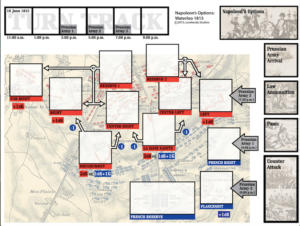 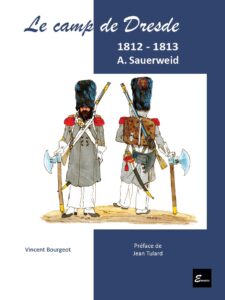 The Camp at Dresden, 1812-1813
The previously unpublished manuscript of A. Sauerweid 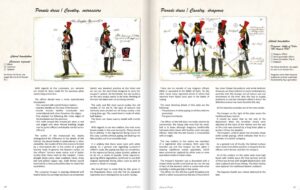 Eyewitness French uniform illustrations by Alexander Sauerweid before Napoleon’s last victory in Germany in the summer of 1813.
In 1813 Alexander Sauerweid (1783-1844) created dozens of uniform plates based upon the soldiers in the French Army and its allies encamped around the city of Dresden before Napoleon’s victory there on August 26-27. These plates have been known to collectors, but until now they were not published as a single collection. 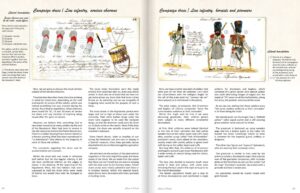 Editions Epopees is publishing this 2-book set in French in December 2021. A limited number of English editions will be available in early 2022. 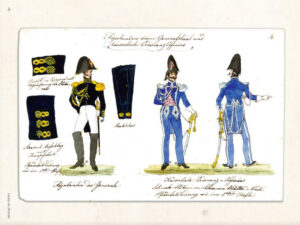 To reserve your copy of the English version use the Paypal button at the bottom of this page. For the French edition send an email to contact@epopees-histoire.fr or click on the following url: https://epopees-histoire.fr/1523547-Le-Camp-de-Dresde-1812-1813.html 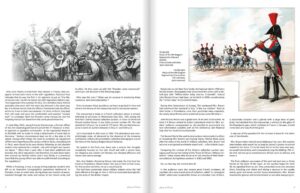 ● Only 175 sets in English
● 2-volume boxed set
● 244 total pages
● Large page format 9.4 inches by 12.5 inches (24 cm x 32 cm)
● Volume 1 – 450+ illustrations; Volume 2 – Analysis of the plates, manuscript context & history.
● Based upon the extensive uniform plate collection of artist Edouard Detaille (1848-1912)
● Plate analysis by researcher and author Vincent Bourgeot
● Foreword by Jean Tulard, member of the Institut de France
● Commentary by uniform experts and authors Alfred Umhey and Yves Martin
● $175 USD per 2-volume boxed set (shipping to be calculated when the book set is published)
● These book sets are being printed in Europe (Czech Republic) so we anticipate a reasonable shipping cost to English readers in the UK and EU countries. Also, these books will be sent via air freight to the USA so there will not be long wait times for customers in Canada and the USA.

This special limited 2-volume set will not be sold in stores. Reserve your copy NOW by making a deposit on PayPal here OR contact dana.lombardy@gmail.com

As soon as the sets arrive in the USA or at our UK and NZ representatives you will be contacted to pay the final $100.00 due. We will know the local shipping fee after we receive the sets.

The attached 2 maps were created for World War One Illustrated magazine, issue #1 (Fall 2013)
That issue can be purchased singly or as one of 9 issues of WWOI that Dana published. For details go here. 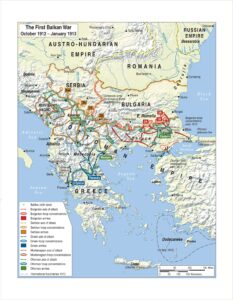 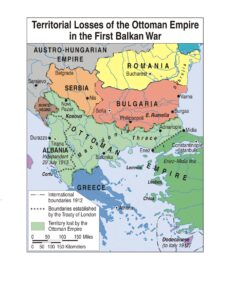 Updates and errata for MacGowan and Lombardy’s The Great War card game. 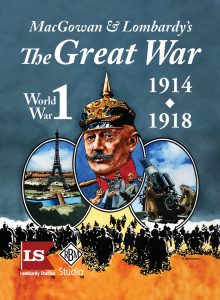 War of the Worlds Rules

No additions have been made yet to MacGowan and Lombardy’s The Great War card game rules version 5.0.

H.G. Wells penned the science fiction classic War of the Worlds in 1898. Forty years later Orson Wells adapted it for a radio drama script that convinced some Americans Earth had been invaded by Mars. Now Dana Lombardy and Craig Richardson have created a War of the Worlds expansion for MacGowan and Lombardy’s The Great War card game. Click the link to download a pdf that tells the backstory of why a science fiction classic was chosen to be the first expansion to a history-based card game.

MacGowan and Lombardy’s The Great War card game has been fully funded on Kickstarter, opening The War of the Worlds expansion as a stretch goal. Click here to go to Kickstarter and help bring the Martians into World War One.

The World War One Centennial Commision has a website and promotes WW1 projects as an adjunct to their mission to build a memorial in Washington, DC. Here is the link to the article they published on their website talking about our cardgame:
Link

Armies at Waterloo has always been known for its exacting orders of battle, including numbers of officers and other ranks present and under arms, as well as precise information on the ordnance comprising each artillery battery/company/troop. The greatly expanded second edition provides even more details, with the orders of battle as well as the ordnance present with each army—including the notes from inspection reports, when available.

A Game Concept With Dramatic Graphics

In 2017 I started working on a game idea to commemorate the 100th anniversary of The Great War (1914–1918). I decided on an abstract card game design about World War One that could be a fun, “filler” game—a game used to fill time between longer games at conventions or while waiting for the rest of your gaming group to arrive. Filler games usually have simple rules and short playing time. I think they are a great way to introduce someone to historical games. 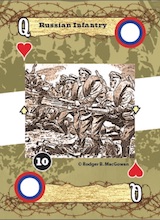 For a card game I knew graphics would be a key factor. If it looked good, it might entice gamers to try it. No matter how clever my design, it wouldn’t matter if no one wanted to play it. That’s where my friend and colleague Rodger B. MacGowan entered the project.

Since the 1970s, Rodger and I have worked together on a variety of projects. A few of the more notable included his illustrations that appeared in my Conflict magazine back then and the cover he created for the third edition of my Streets of Stalingrad game (2002). We produced several items for the 200th anniversary of the Battle of Waterloo in 2015 that used Rodger’s excellent illustrations of Napoleon, Wellington, and Blücher. MacGowan and Lombardy’s The Great War™ card game is our most recent collaborative effort. The game uses almost all of Rodger’s stunning World War One illustrations—appearing on 21% of the nearly 200 cards. Rodger also created the play mat and box art for TGW.

My assumption that a card game would take less work to create compared to a board game proved . . . completely wrong.

My design accomplished the objectives of simple rules—just two sides of one 8.5 X 11 sheet of paper—and quick play. The basic game of ten turns (20 rounds) requires about an hour to complete. By comparison, GMT’s Wing Leader card game is listed as taking 90 to 120 minutes to play—and the WL tables are constantly busy at Consimworld Expo where large, multi-day games are the norm (WL is a fantastic game system, by the way). 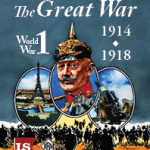 Although my game used a simple play mechanic, game development took months. I did not count on the hundreds of permutations possible when the cards interacted with other cards in so many ways. This complexity required months of concentrated playtesting, with continual adjustments to card play, the numbers and types of cards, and the text on the cards. I am very happy with the end result. (Download the latest one-sheet rules for The Great War , as well as the Quick Play Outline, overview-glossary of the cards, examples of play, and sample cards.)

And then there were the professional and personal delays that unfortunately dragged out the development of the game well past 2018 and beyond the end of the WW1 commemoration. (You can read about The Great War 100th anniversary exhibit that consumed most of my time in 2018.) 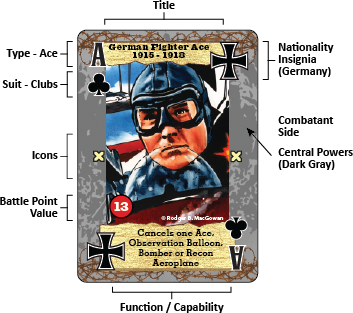 However, by the time of Consimworld Expo 2019 The Great War card game was substantially changed from just two 54-card decks—one British-German and one French-German, including jokers. The game now contained a small deck of random-event cards such as bad weather, friendly fire, and bad luck that might affect either or both players. There was also new a deck of “bonus” cards that could be played with other cards or separately during a round. These bonus cards include types of artillery fire, snipers, tunneling, and improvements in weapons/tactics/doctrine, etc. The random event and bonus cards added more historical depth and more play options to the game, but without adding a lot of rules.

How was this possible? Because the icons and text on each card provide the special or unique rules on how to use that specific card. These also explain how that card interacts with other cards. No need for the players to look up card effects in the rulebook—just do what it says on the card.

Ok, So How Does This Game Actually Work?

During their turn, players choose cards from their hands and play them face-up in front of them. As an example:

The Defender for a turn places cards representing the terrain and/or reinforced trenches and/or units that will face the attack. 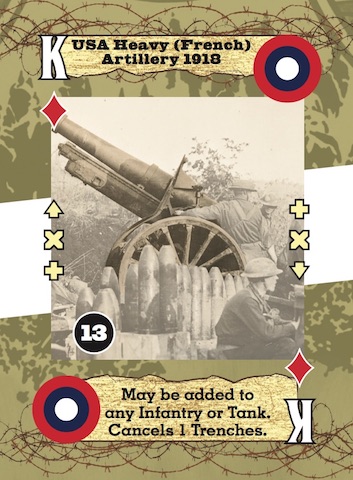 The Attacker then chooses a heavy artillery card and places it face up. If the artillery card is not cancelled by a Defender’s action, the Attacker may then in this same round add a reconnaissance aeroplane and a “Rolling Barrage” bonus card since both of these cards may be added to the artillery (artillery spotters in planes provided a significant force multiplier to artillery fire, and rolling or creeping barrages had more effect than simply firing all over the battlefield). Again, the icons and text on the cards explain these capabilities and which cards can be added to another card.

After another round of play, both sides count the number of battle points on all their face-up cards. The player with the most points wins that turn and takes (captures) the enemy cards (Defender wins ties). Players then switch Attacker and Defender roles for the next turn.

The game mechanic used in The Great War is basically “trick-taking” in card game terminology—the highest points win that turn. But it’s possible to lose several turns and still win the game as you draw more cards each turn and play them shrewdly.

A Team of 25 Developed The Great War card game

In addition to Rodger and me, there are a host of other people who made sure TGW is an attractive and fun card game.

Nearly 20 additional people playtested TGW. Four of them stand out: Ray Hosler and his son Eric, who gave me great feedback on the first iteration of the game, and Charles Schwartz and his wife, Tina, who were among the group that playtested the final version. (Tina is not a wargamer—if she enjoyed it I must have done something right!)

I cannot express my gratitude enough to Rodger for his continued friendship and encouragement. And a huge thanks to all of the people who helped make MacGowan & Lombardy’s The Great War card game something special.

Learn more about
MacGowan and Lombardy’s The Great War™ card game
and support the Kickstarter.