By Dana Lombardy. Why did Napoleon magazine become Napoleon Journal, and what’s the difference? The story about its evolution as a publication involves a little-known predecessor called Empires, Eagles & Lions. 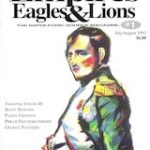 In 1976, Jean Lochet started publishing a small format publication dedicated to Napoleonic history and wargaming called Empires, Eagles & Lions—nicknamed “EEL.” It was a club-like ’zine or newsletter printed in black ink only with mostly text. Despite its modest format it became a respected if not controversial periodical, attracting writers such as British historians Paddy Griffith and Philip Haythornthwaite, and American historians Scott Bowden and George Nafziger, among others.

Todd Fisher, owner of The Emperor’s Headquarters in Chicago, offered to develop Jean’s EEL into a slick magazine with a color cover and interior illustrations. The enhanced EEL, subtitled “The Napoleonic Source Magazine,” appeared in the summer of 1993 as issue #1.

Despite the improvements and contributions from a wide range of notable writers, EEL was not attracting a bigger readership. This is when Todd contacted me for help.

By 1994 my publishing background included founding Conflict magazine (1972-1975) that incorporated a paper map and die-cut counter wargame with most of the issues—similar to Strategy & Tactics, but Conflict included color interior pages and maps, unlike S&T at that time. From 1978 I worked on Model Retailer, a trade magazine that went to owners and managers of hobby stores and chains in the USA. My job included writing a column about how hobby shops could stock games to broaden and increase a store’s number of customers. This led to my promotion as Associate Publisher for Model Retailer, and then as AP for the new trade publication Game Merchandising in 1983. Todd Fisher knew of me professionally since we both worked in the game business.

Other than a few books I read, I knew very little about Napoleonic history. That would change dramatically—and quickly.

As Publisher of EEL from issue #7 in 1994, I increased the number of interior illustrations, added color, and worked with the art director to improve the magazine’s overall appearance. By issue #14 in 1995 circulation had grown only modestly. A major boost was needed.

Although Jean and Todd thought the acronym EEL was memorable, I pointed out that most people simply wondered what the magazine was about. Which empire? What era? 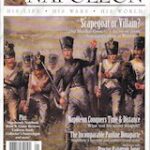 Renaming EEL to Napoleon in 1996 solved this uncertainty, but more than a name change was needed. A complete layout overhaul was introduced that included battle studies, details on tactics and organization, personalities, interviews with prominent historians and authors, and more. Napoleon was subtitled “His Life, His Wars, His World” to emphasize the format change. Napoleon was a totally new magazine design, but it utilized the same consortium of experts that earned EEL admiration.

I learned a lot about Napoleonic history in two years of editing and often researching information to fact check maps and augment the articles submitted to the magazine. 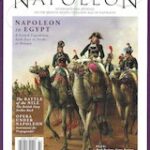 Napoleon’s next 12 issues were well received. But like the mathematical paradox of the frog that hops halfway to the wall with each jump—and never reaches the wall—the magazine’s continual improvements helped but never achieved the breakthrough we hoped for. Another boost was needed.

That final lift consisted of another format change: increased page count per issue, a perfect binding (like a book spine instead of staples), a revised subtitle “International Journal of the French Revolution and Age of Napoleon,” and a quarterly release schedule instead of bi-monthly. Unfortunately, after four issues of the journal, The Emperor’s Headquarters was unable to continue publishing.

Printed back issues of EEL and Napoleon (magazine and journal) are no longer available, but Lombardy Studios sells a PDF searchable collection of Napoleon issues 1-17 plus an index to the first 12 issues on a DVD.