Lombardy Studios announces that the series of books first mentioned in 2015 under the name Napoleon’s Last Army is officially cancelled. Instead, two exciting new publications centered on Napoleon’s Hundred Days reign are now being developed. Also, a Waterloo art book should arrive at our USA warehouse in early 2022. 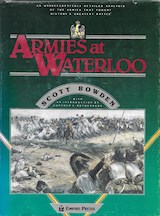 An elegant one-volume, expanded edition of the critically-acclaimed Armies at Waterloo first published in 1983 by award-winning historian and author Scott Bowden is currently in production for release in 2023. The greatly expanded edition includes additional research developed over the past 37 years, with fresh detailed analysis of the 1815 Waterloo campaign and battle, beautifully illustrated with a number of color images, and newly commissioned color maps.

Read Scott’s first blog entry detailing what will be different and exciting about the greatly expanded edition of Armies at Waterloo here.